Magic is quite sexy nowadays, quite trendy. Lots of young, hip magicians performing fast paced, mind boggling tricks quite often on the street and quite often to a young audience. Its had a bit of a resurgence on the TV too. Everyone is familiar with Dynamo and despite being a shy, skinny kid from Bradford he’s taken the world by storm! A lot of people were surprised when a magician actually won Britain’s Got Talent this year – especially as Simon Cowell famously ‘hates’ magicians – but Richard Jones won over Mr Grumpy and the voters at home and took the trophy for 2016 (is there an actual trophy? Probably not!). 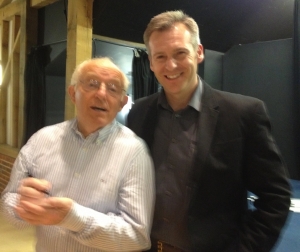 I’m delighted that magic is now more to the forefront. It spent a lot of years being deeply unfashionable so anything or anybody who can get kids interested in the art of the magician is good news. But … do you remember when our Saturday evening TV was dominated by a little chap from Middlesborough called Paul Daniels? Its interesting to look back now and realise just how incredibly popular PD was. He hosted The Paul Daniels Magic Show from 1979 – 1994. It seems unbelievable now that a magician could feature on prime time TV for 15 years straight! In addition, he also hosted popular programmes of the time such as Odd One Out and Every Second Counts and starred in his own stage show in London. And lets not forget the lovely Debbie McGee of course – his assistant and wife – who worked with him from 1979 right up to his last show.

I was transfixed by Paul Daniels when I was a kid and never missed a single episode of The Paul Daniels Magic Show. Its because of PD that I became a professional magician myself. I was lucky enough to see him on stage a number of times and was even chosen to help him with a trick! He was such a great performer and professional. I last saw him perform a couple of years ago at a small theatre near Southampton. After the show, he mingled with the audience – as did Debbie – signed autographs, chatted with everyone and posed for photographs. Thats where the photo above was taken.

It was a very sad day for me when we lost Paul. A true professional and a gentleman. If you get time, go and search for his Chop Cup Routine on You Tube. He makes it look so easy!

Thanks for the memories, Paul.

About the Author: Malcolm

For over 30 years, Malcolm has entertained countless children with his enthusiastic and spellbinding magic. He is one of the top children’s entertainers in the South and his warm and friendly personality will ensure all your guests are included in the fun and laughter. Malcolm is a highly experienced and popular magician, having entertained children all over the world!